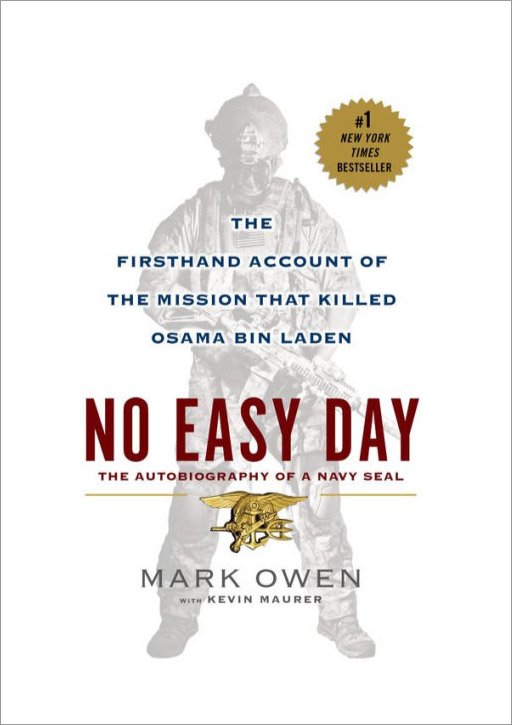 No Easy Day: The Firsthand Account of the Mission that Killed Osama Bin Laden

From the streets of Iraq to the rescue of Captain Richard Phillips in the Indian Ocean, and from the mountaintops of Afghanistan to the third floor of Osama Bin Laden’s compound, operator Mark Owen of the U.S. Naval Special Warfare Development Group—known as SEAL Team Six—has been a part of some of the most memorable special operations in history, as well as countless missions that never made headlines.

No Easy Day puts readers alongside Owen and his fellow SEAL team members as they train for the biggest mission of their lives. The blow-by-blow narrative of the assault, beginning with the helicopter crash that could have ended Owen’s life straight through to the radio call confirming Bin Laden’s death, is an essential piece of modern history.

In No Easy Day, Owen also takes readers into the War on Terror and details the formation of the most elite units in the military. Owen’s story draws on his youth in Alaska and describes the SEALs’ quest to challenge themselves at the highest levels of physical and mental endurance. With boots-on-the-ground detail, Owen describes several missions that illustrate the life and work of a SEAL and the evolution of the team after the events of September 11.

In telling the true story of the SEALs whose talents, skills, experiences, and exceptional sacrifices led to one of the greatest victories in the War on Terror, Mark Owen honors the men who risk everything for our country, and he leaves readers with a deep understanding of the warriors who keep America safe.

War Animals: The Unsung Heroes of World War II Millions rallied to the cause of freedom against Nazism and the menace of Imperial Japan. But did you know that some of those heroes had fur, or feathers? War animals guarded…
END_OF_DOCUMENT_TOKEN_TO_BE_REPLACED

The Attack on Pearl Harbor: A Day That Changed America On December 7, 1941, Japan’s surprise attack on the U.S. naval base in Pearl Harbor, Hawaii, propelled the United States into World War II. Now readers can step back in…
END_OF_DOCUMENT_TOKEN_TO_BE_REPLACED

Craig & Fred: A Marine, A Stray Dog, and How They Rescued Each Other The uplifting and unforgettable true story of a US Marine, the stray dog he met on an Afghan battlefield, and how they saved each other and…
END_OF_DOCUMENT_TOKEN_TO_BE_REPLACED