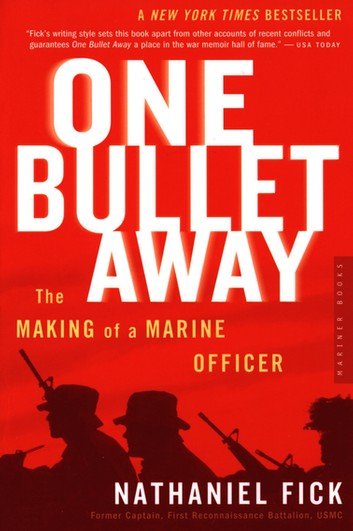 One Bullet Away: The Making of a Marine Officer

If the Marines are “the few, the proud,” Recon Marines are the fewest and the proudest. Nathaniel Fick’s career begins with a hellish summer at Quantico, after his junior year at Dartmouth. He leads a platoon in Afghanistan just after 9/11 and advances to the pinnacle—Recon— two years later, on the eve of war with Iraq. His vast skill set puts him in front of the front lines, leading twenty-two Marines into the deadliest conflict since Vietnam. He vows to bring all his men home safely, and to do so he’ll need more than his top-flight education. Fick unveils the process that makes Marine officers such legendary leaders and shares his hard-won insights into the differences between military ideals and military practice, which can mock those ideals.

In this deeply thoughtful account of what it’s like to fight on today’s front lines, Fick reveals the crushing pressure on young leaders in combat. Split-second decisions might have national consequences or horrible immediate repercussions, but hesitation isn’t an option. One Bullet Away never shrinks from blunt truths, but ultimately it is an inspiring account of mastering the art of war.

One Bullet Away: The Making of a Marine Officer by Nathaniel C. Fick

War Animals: The Unsung Heroes of World War II Millions rallied to the cause of freedom against Nazism and the menace of Imperial Japan. But did you know that some of those heroes had fur, or feathers? War animals guarded…
END_OF_DOCUMENT_TOKEN_TO_BE_REPLACED

The Attack on Pearl Harbor: A Day That Changed America On December 7, 1941, Japan’s surprise attack on the U.S. naval base in Pearl Harbor, Hawaii, propelled the United States into World War II. Now readers can step back in…
END_OF_DOCUMENT_TOKEN_TO_BE_REPLACED

Craig & Fred: A Marine, A Stray Dog, and How They Rescued Each Other The uplifting and unforgettable true story of a US Marine, the stray dog he met on an Afghan battlefield, and how they saved each other and…
END_OF_DOCUMENT_TOKEN_TO_BE_REPLACED