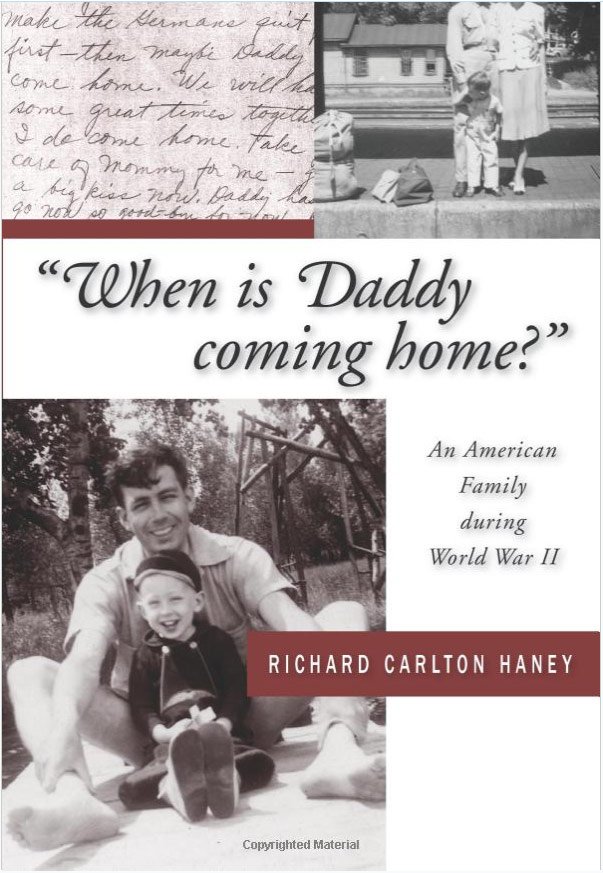 “When is Daddy coming home?”: An American Family during World War II

World War II was coming to a close in Europe and Richard Haney was only four years old when the telegram arrived at his family’s home in Janesville, Wisconsin. That moment, when Haney learned of his father’s death in the final months of fighting, changed his and his mother’s lives forever.

In this emotionally powerful book, Haney, now a professional historian, explores the impact of war on an American family. Unlike many of America’s 183,000 World War II orphans, Richard Haney has vivid memories of his father. He skillfully weaves together those memories with his parents’ wartime letters and his mother’s recollections to create a unique blend of history and memoir. Through his father’s letters he reveals the war’s effect on a man who fought in the Battle of the Bulge with the 17th Airborne but wanted nothing more than to return home, a man who expressed the feelings of thousands when he wrote to his wife, “I’ve seen and been through a lot but want to forget it all as soon as I can.” Haney illuminates life on the home front in small-town America as well, describing how profoundly the war changed such communities. At the same time, his memories of an idyllic family life make clear what soldiers like Clyde Haney felt they were defending.

War Animals: The Unsung Heroes of World War II Millions rallied to the cause of freedom against Nazism and the menace of Imperial Japan. But did you know that some of those heroes had fur, or feathers? War animals guarded…
END_OF_DOCUMENT_TOKEN_TO_BE_REPLACED

The Attack on Pearl Harbor: A Day That Changed America On December 7, 1941, Japan’s surprise attack on the U.S. naval base in Pearl Harbor, Hawaii, propelled the United States into World War II. Now readers can step back in…
END_OF_DOCUMENT_TOKEN_TO_BE_REPLACED

Craig & Fred: A Marine, A Stray Dog, and How They Rescued Each Other The uplifting and unforgettable true story of a US Marine, the stray dog he met on an Afghan battlefield, and how they saved each other and…
END_OF_DOCUMENT_TOKEN_TO_BE_REPLACED