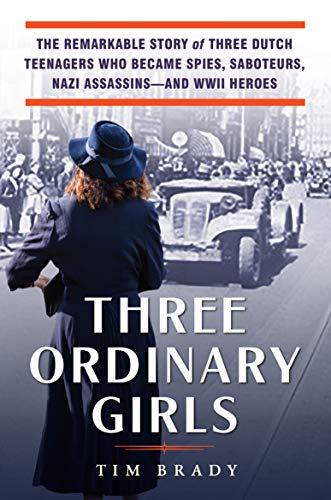 The astonishing true story of three fearless female resisters during WWII whose youth and innocence belied their extraordinary daring in the Nazi-occupied Netherlands. It also made them the underground’s most invaluable commodity. Recruited as teenagers, Hannie Schaft, and Dutch sisters Truus and Freddie Oversteegen fulfilled their harrowing missions as spies, saboteurs, and Nazi assassins with remarkable courage, but their stories have remained largely unknown…until now.

May 10, 1940. The Netherlands was swarming with Third Reich troops. In seven days it’s entirely occupied by Nazi Germany. Joining a small resistance cell in the Dutch city of Haarlem were three teenage girls: Hannie Schaft, and sisters Truus and Freddie Oversteegen who would soon band together to form a singular female underground squad.

Smart, fiercely political, devoted solely to the cause, and “with nothing to lose but their own lives,” Hannie, Truus, and Freddie took terrifying direct action against Nazi targets. That included sheltering fleeing Jews, political dissidents, and Dutch resisters. They sabotaged bridges and railways, and donned disguises to lead children from probable internment in concentration camps to safehouses. They covertly transported weapons and set military facilities ablaze. And they carried out the assassinations of German soldiers and traitors–on public streets and in private traps–with the courage of veteran guerilla fighters and the cunning of seasoned spies.

In telling this true story through the lens of a fearlessly unique trio of freedom fighters, Tim Brady offers a little-known perspective of the Dutch resistance during the war. Of lives under threat; of how these courageous young women became involved in the underground; and of how their dedication evolved into dangerous, life-threatening missions on behalf of Dutch patriots–regardless of the consequences.

War Animals: The Unsung Heroes of World War II Millions rallied to the cause of freedom against Nazism and the menace of Imperial Japan. But did you know that some of those heroes had fur, or feathers? War animals guarded…
END_OF_DOCUMENT_TOKEN_TO_BE_REPLACED

The Attack on Pearl Harbor: A Day That Changed America On December 7, 1941, Japan’s surprise attack on the U.S. naval base in Pearl Harbor, Hawaii, propelled the United States into World War II. Now readers can step back in…
END_OF_DOCUMENT_TOKEN_TO_BE_REPLACED

Craig & Fred: A Marine, A Stray Dog, and How They Rescued Each Other The uplifting and unforgettable true story of a US Marine, the stray dog he met on an Afghan battlefield, and how they saved each other and…
END_OF_DOCUMENT_TOKEN_TO_BE_REPLACED